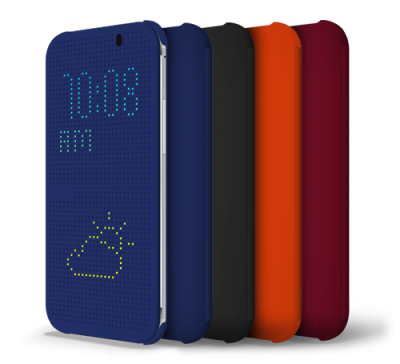 Now that most smartphones are close to being on a level playing field as far as specs, screen resolutions, UI and hardware, manufactures are trying to find more ways to set their devices apart from competitors. Not long ago HTC released their 2014 flagship device – HTC One M8. The phone itself made a big enough splash itself when it was released, but the flagship device also stood out by taking building off of the idea of a flip case with their Dot View case.

The Dot View case gives users increased functionality with their device with the case is closed. Unlike other flip cases such as the Samsung Flip Case for the S3 and the iPad Smart Cover, the Dot View case allows uses to answer or ignore calls, check the time, preview the weather, and stay notified of missed calls, text messages, voicemail and low battery. Users can also answer calls by bringing the phone to their face – all of this possible while case is closed and the phone is protected. The case works by displaying light through the dots on the case, resembling a retro, pixel art style. 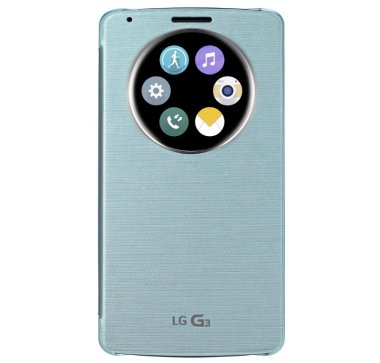 More recently, the LG announced their new flagship device – the LG G3. Like the HTC One M8, LG has built up hype around this phone, with it’s most impressive feature being the Quad HD 2560 x 1440 LCD screen. Besides the unbelievable screen resolution and minor UI enhancements, G3 users also have the opportunity to increase the functionality of their shiny new toy with the LG QuickCircle case. Like the Dot View case, the QuickCircle case allows user to conveniently access necessary functions of their device while the case is closed.

Instead of allowing touch functionality through the case, LG’s new case exposes the screen in a circular area. The device offers a minimal UI from the lock screen, but allows users to take photos, send messages, make phone calls, check their health, and listen to music. LG does take the case one step further by allowing wireless charging.

While these two cases offer added convenience, it’s hard not to wonder it it would be worth the investment. The HTC One M8 Dot Case will run you around $50, and while the price has not been announced for the QuickCircle case just yet, it will likely be higher than that of the Dot Case given the additional wireless charging capabilities.

Which would you prefer? The Dot Case that aims to provide only the necessary features and a simplistic design, or the QuickCircle case that provides more features and the addition of wireless charging, but sacrifices a little more protection? And, would you like to see smart cases such as these two implemented on more devices?