If you haven’t heard the hype, Chinese phone manufacturer, Xiaomi, announced the successor of the Mi 3 earlier this week – the Mi 4. Commonly referred to as ‘the Apple of China,’ Xiaomi has managed to create a device with the right combination of build quality, design and specs, all while managing to keep the price tag at a reasonable $320 (16GB.) However, instead of comparing the Mi 4 to the device in which it is being called a copy of, the iPhone 5s, let’s take a look at how it stacks up to the similarly priced, and widely popular Nexus 5. 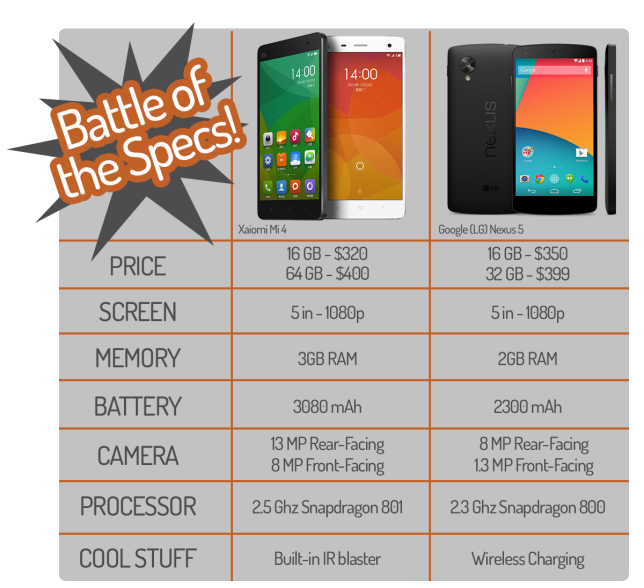 As you can see, the newly announced Mi 4 has some very impressive specs across the board. Compared to the Nexus 5, which has proved to be a favorite among consumers and critics alike, the Mi 4 is a huge competitor. With a tablet sized battery, 13 MP rear-facing camera and built-in IR blaster, the Mi 4 gives some of the major flagships a run for their money.

So if you’re in the market for an affordable, quality device, and umm.. well you happen to live in China, it may be worth while to check out the Xiaomi Mi 4.

What are your initial thoughts on the Xiaomi Mi 4? Leave a comment below, or connect on Twitter (@HOOKDin). Be sure to subscribe and get #HOOKD for future ‘Battle of the Specs!’ and more on technology and advertising!